How to use Twitter to grow your business - A Complete guide 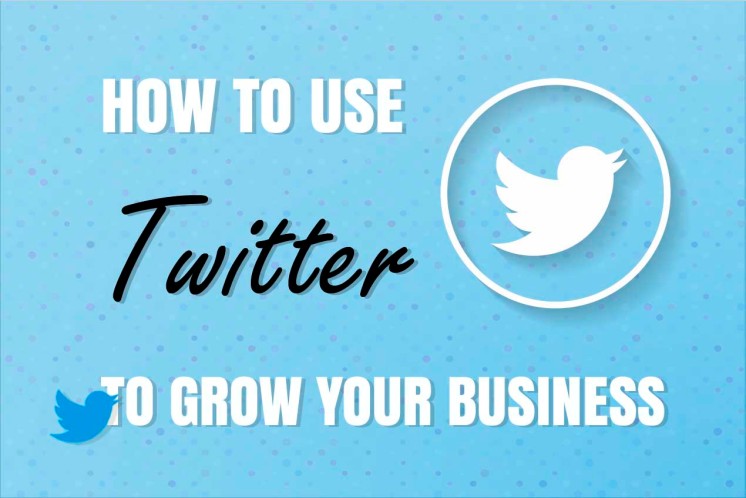 There are so many social media sites that billions of people use and this huge market allows the businessman to promote their product and services. Most famous are Facebook, Instagram, Pinterest, and Twitter. Twitter allows you to share your thoughts in 140 characters and it’s in unique compared to other social media. Currently, as of the second quarter of 2017, 328 million monthly active users on Twitter At the beginning of 2016, Twitter had reached 310 MAU per quarter. So you have vast opportunity to show your product and business idea so let’s get started.

Twitter, also known as the “SMS of the Internet”, was founded in 2006 and now has more than 300 million registered monthly active users who post and read messages with up to 140 characters. Users can add links, photos and videos to their tweets, include hashtags to help others find their message, and run polls within a tweet.

For advertisers, Twitter offers a variety of ad types that can be tailored to different campaign objectives, from increasing website visits and sales to creating a bigger following for a company’s Twitter account. Twitter also offers rich options to target a specific audience, including demographics, interest and behavior targeting.

Twitter organizes its different ad types by campaign objective: i.e., the action an The advertiser wants a user to perform. Depending on which campaign objective you choose, the ad will be displayed in a different format, which Twitter calls “Cards.” For detailed technical specifications of the different card types,

To get started you need an active Twitter account. Go to Twitter Ads and you will be prompted with a screen where you select your campaign objective. These objectives match the ones we have discussed above. If you get stuck, have a look at Twitter’s documentation for Businesses.

Promote new or existing tweet to your target audience. You pay for engagement with the tweet, e.g., clicks, retweets, likes, follows and replies. If you prefer to maximize brand awareness and care less about engagement, you can book an Awareness campaign. Here you pay for the number of impressions (CPM). You can attach up to four images to your tweet. If you do this, only 116 characters are available for your Tweet, as 24 characters are used for the images.

Embed a video in a tweet and promote it to your desired audience. Your videos will auto-play muted on scroll, encouraging users to tap or click to open the tweet and watch. Twitter will show your ad as a “Video Card” that consists of your ad copy (max. 140 characters), a video, a video title (max. 70 characters), and a video description (max. 200 characters). You pay for video views, which Twitter defines as follows: “A view occurs when a video is at least 50% in-view on the user’s device and has been watched for at least 2 seconds, or the user clicks to watch the video in full screen.” You can promote tweet with video also.

If you want to promote your Twitter account and grow your follower base, this is the ad type for you. Twitter suggests to your target audience that they follow your account, and also indicates whether any of their followers follow your account. These ads show up in the user feed and in the “Who to follow” sidebar on Desktop. You pay for every follower the ad generates.

Drive your audience to your website using this campaign type. Twitter will display your message in a “Website Card” that consists of your ad copy (max. 116 characters), an image and a website title/description (max. 70 characters). You will pay for website link clicks.

This ad type makes use of the “Website Card” shown above but optimizes campaigns for conversions such as purchases or downloads on your website. Advertisers have to integrate the Twitter website tag on their site, so Twitter can track conversion. User data about interests and intent helps Twitter optimize the campaign delivery. Although the objective is conversion, you still pay for website link clicks.

If your campaign objective is to generate downloads of your mobile app or motivate people to open it again, this could be a great ad type for you. This promoted tweet is shown as an “App Card” which consists of an ad copy (116 characters), an image, the app name, price and rating (pulled from the app store), and a call to action button. You can choose to either pay for app link clicks or app installs.

With the lead generation campaign type, you can create promoted tweets that aim to collect the user’s email address, so you can follow up with a newsletter or offer. The Lead Generation Card includes your ad copy (116 characters), a Call to Action button (20 characters), a short description (50 characters) and an image. If a user clicks the Call to Action button, Twitter will submit the name and email associated with the user’s Twitter account and show a customizable message (100 characters). You pay for the number of leads generated.

Twitter offers the following nine targeting options that you can combine as needed:

Gender: - you can target only male or only female users or both. Twitter infers genders from information users share as they Use Twitter, e.g., their profile names.

Languages: - By default, Twitter delivers campaigns to all languages, so make sure to target only people who understand your message.

Devices, Platforms, and Carriers: - Target users who use specific mobile devices (e.g. iOS, Android, Blackberry) and mobile phone carriers (e.g. AT&T, Verizon) to access Twitter. You can also target users based on when they first used Twitter on a new device or carrier.

Interest: - Target users based on 25 interest categories that expand into 350 subtopics, from Automotive to Travel. Twitter identifies user interests based on what content users engage with and what usernames they follow.

Followers Provide Twitter with a list of usernames and your ad will reach users who have similar interests as those who follow any of the accounts you have listed.

Behaviour:-To target users based on their online and offline behavior (e.g., product or shopping preferences), Twitter utilizes user data that third-party data providers have shared with them.

Tailored Audiences With tailored audiences, you can target existing customers, leads or website visitors. To do this, you have to upload a list of emails, Twitter IDs or mobile advertising IDs.

What is the minimum budget to advertise on Twitter?

Twitter requires you to set up a maximum daily budget for your campaigns, after which Twitter will stop distributing your ad. Optionally, you can also set a maximum budget for the duration of the whole campaign. The cost of an action (defined by campaign type, as explained earlier) depends on how many other advertisers, who compete with you for the same audience, bid. Unlike Facebook and Instagram, Twitter does not ask you to commit a minimum budget.

So, I hope that you have got a good idea about how to use the Twitter to grow your business. I am sure that you will use it and find it. You can also check and get to know how to use Instagram for Social media marketing? Form my previous blog. If you like it then share it with your friends on Social Media from below buttons.